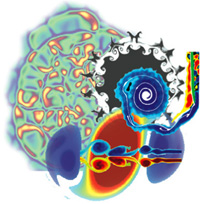 A collage of images from the
research results of SCAT members

Bristol— The final report of the SCAT project has been produced and delivered in Brussels.

In the total duration of the project, we awarded 31 Mobility Grants and organized 10 international meetings. The grants programme, in particular, was a tremendous success. The impact on the lives of the young grant holders was greater than we ever anticiated when designing the proposal for SCAT.

The total number of grant-holder months awarded was 235, which is equivalent to almost 20 graduate-student years, overall. Therefore, it is undoubtable that not only were these young people benefitted by their experience, but the host institutions as well benefitted from the great human resource that was allocated to their labs.

At the 10 SCAT meetings, which were held at the different locations of the member institutions, the project participants presented their ongoing research work, and engaged in discussions with other partners aiming at collaboraiton. The meetings were often enhanced with short courses for the local scientific community and students.

The impact of the international meetings as a means of promoting collaboration among the partners was even greater than we hoped for. As the various people engaged in discussions about their research interests, and later socialized together, lasting bonds were created. We have no doubt that there will be long-term impact generated by the networking that occurred during the SCAT meetings.

The project continued throughout its duration to offer a professional and informative web site, and we continued to disseminate our activities to the wider academic communities in the countries of the partners.

Read about the activities of the SCAT project in detail in the Final Report, made available to all visitors of our web site (below).

Presenting the activities of the period from Nov. 2007 to July 2009, including Mobility Grants, International Meetings and Courses, Dissemination, and Collaboration.

The table below lists the various documents that were included in the Final Report as Appendices. Click on the PDF icon to view the document.

In the table below is listed a small sample of appearances in the press or dissemination online for the SCAT events or other achievements of the members of the project.

A sample of the scientific publications generated as a direct result of the collaboration of the partners, and the research work of the SCAT grantees can be found in the Publications section of the website.