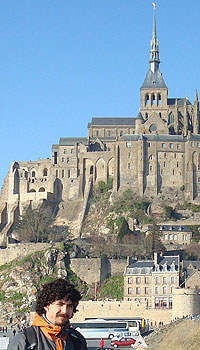 Paris, France — A cotutelle program starts with a French university and another institution signing an agreement, whereby students in each institution can obtain a joint degree.

Victor —born in Quito, Ecuador, but a national of Chile —started a SCAT mobility grant in the Laboratoire Physique et Mécanique des Milieux Hétérogènes in September 2007. In Paris, his research experience was supervised by Dr Benoit Roman, with whom Victor carried out work in the area of fracture mechanics of thin sheets. The work produced some interesting results which were presented at the meeting of the American Physical Society, APS, in New Orleans (March 2008).

The success of Victor continues to be rewarded, as he now has received a scholarship from CONICYT in Chile, within the program Colegio Doctoral Franco Chileno —which will bring him to Paris once again in September 2008.

Victor joins the list of SCAT grantees that have finished their research visit and gone to other successes:

Here is the personal point of view of Victor Romero, on his SCAT grant:

"The possibility of working at the PMMH arose because of friendship and the collaboration between my advisor in Chile and Professor Dr. Benoit Roman in Paris. However, this idea became reality thanks to the SCAT Project which supported this internship.

The main idea of this visit was to commence work on my PhD thesis. The topic is elasticity, and fracture of thin sheets. As a result, I worked in Paris for 8 months with Benoit Roman doing an experiment in fracture and comparing the results with a computer simulation. We were able to realize some important behavior of the crack process.

This initial internship became a cotutelle of my PhD, which is a doctorate with two advisors, one in Chile and one in Paris, and indeed my PhD degree will be awarded jointly by the two universities. Because of this I will go back to Paris next year supported by a Chilean scholarship.

Our research has been quite successful and it was presented at the APS 2008 Annual March meeting and to the "Rencontre de Physique Statistique", where it was possible for me to show the work and share with very important people of the physics world. The abstract submitted to the APS meeting can be found on the internet.

I cannot forget to mention that Paris, as a scientific center, is an excellent place, where there are many labs with people working in a wide variety of subjects. As you meet people, it is easy to visit labs where there are a lot of physics happening and where people are always kind and they have the patience of show their labs and their work.

Particularly interesting is the work of the group of Professor Dr. Areski Boudaoud at LPS or Professor Dr. Basile Audoly. One other example of this, is that at ESPCI, which is where the PMMH is, there are weekly seminars —in one of these seminars I had the honor of hearing a talk given by Professor Cohen-Tannoudji (Nobel Prize winner in 1997).

At this point I'm working at my University in Chile and my perspectives are to finish my cotutelle program with both of my advisors. Later, I hope, there will be a possibility of spending some time at MIT with some people involved in the thin sheets subject.

I would like to say that Paris is such a nice place to be, not only because of the history of this city, the richness of the culture and the marvelous architecture, but also because it is a place where you can live pretty much problem-free. Finally, I want to thank the SCAT project for this amazing opportunity and specially to Mr Boris Drappier who was always kind with me and was always available to help in any circumstance."

Describes the visit and results of the research collaboration during the grantee's mobility.