SCAT grantee to do PhD in Bristol, funded by BAE/Airbus 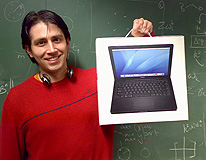 Felipe Cruz was also the happy
winner of the SCAT Apple Prize.

Bristol— Felipe Cruz came to Bristol on a SCAT mobility grant in June 2007. He is working with Dr Lorena Barba at the Deparment of Mathematics.

Thanks to the experience during these past months, Felipe has gained in confidence and skills, and decided to apply for PhD study at Bristol. Although he was offered a place, he faced a considerable hurdle: how to fund the overseas fees for postgraduate study.

Dr Barba recognized in Felipe an outstanding candidate for PhD studies, and thus pursued all known avenues for securing his funding. After he was not selected for an Overseas Research Scholarship award (which are aggressively competitive), all seemed lost, however.

But fortune smiled when SCAT members Dr Ian Stewart and Dr Barba talked about Felipe to some contacts at BAE Systems. As it turns out, BAE is one of several industrial partners on the new Centre for Fluid Mechanics Simulation, CFMS, and they are in acute need of talented scientists to progress the aims of this initiative. No wonder, as these aims are to increase the power of fluid mechanics-based design processes by up to a million times by 2012.

The end of this news story —and the beginning of an exciting PhD project for Felipe— is that the CFMS project and the University of Bristol have signed a contract for 3 years, supporting Felipe's PhD studies in full.

Computational fluid dynamics (CFD) methods are predominantly based on the continuum formulation of the Navier-Stokes equations. Standard methods include finite-volume and finite-element discretizations in addition to several approaches for turbulence modelling. However, CFD methods need to be both faster and more accurate if more simulation and less physical testing are to be used in the design process. Being a mature discipline, CFD will need fundamental changes to deliver such an increase in simulation capability.

This PhD project is aimed at investigating one such fundamental change, which is to incorporate non-continuum representations of the fluid quantities with the standard continuum approach. The non-continuum, or particle simulation, approach has been developed mostly separate from traditional CFD, save few exceptions. Several special features of these alternatives seem very attractive as possible means for increasing the simulation capability of CFD. In particular, reduced numerical diffusion often means that high-accuracy can be obtained with a smaller computational footprint compared to traditional methods as the latter may require extremely fine meshes for the resolution of flow features such as large flow gradients.

Describes the research project and the candidate.